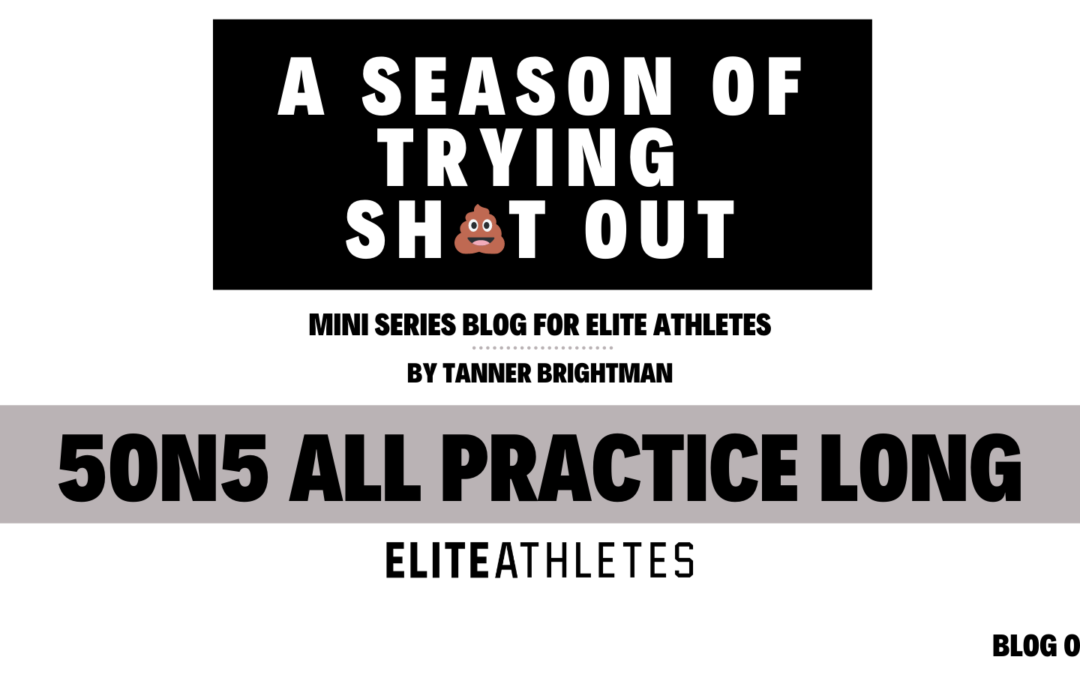 Welcome back readers of Trying Shit Out! If you have made it this far, or checking in for the firsttime, I appreciate you giving me a chunk of your time, and head space.

Feel free to reach out if you have ideas, questions, or challenges of ideas! Amazing – tanner.brightman@eliteathletes.be or on twitter @TannerBrightman

We are talking compete and learn today.

Why did we do this?

The obvious start I guess is that the actual game is played that way.. Why don’t we practice
more of the way we are going to play?

Prior to this season, I was regularly planned, progressive building towards the 5on5 stage. Concepts broken down into 2on2 3on3 etc. Usually advantage based for the offense, then building to neutral, then an offensive disadvantage to push these ideas a bit further.

It worked, and I was comfortable. But the actual chunks of practice we spent playing 5on5 were relatively small outside of transition. Maybe this was enough? Do we ever really know.

Instead of increasing maybe 10 minutes, why not just make the whole section of our time
together 5on5. Trying shit out.

Okay, it’s set – we are doing it. Now, how to avoid the “roll it out and play” for 60 minutes, because we have all been in a gym where this is happening, or we hear the “she/he is just a roll
it out and play coach.

This season was about giving up some of that control, and increasing the enjoyment, and intentionality of what we were doing. If we were going to do this, we would have to scale back the tactical approaches, and the amount of NEW things we were adding.

As we began planning how 5on5 would look for that 60 minute stretch of period, we looked first of what the structure of that 5on5 was going to be.

This was shaped by Teams, Constraints, Starter of Possesions, and Topic Areas (systems)

Teams: we kept teams together for a week stretch, in nearly the same small groups they were in for the pre and post practice work. We liked this as it gave guys a chance to connect a bit more with different groups. I have always found it tough with a top heavy team talent wise to get the “starters” the reps they need without kicking the shit out of the opposing team.

By going right to 5on5, teams had a pretty good idea of positionally what they were doing, and where they should be. Sometimes in 2on2 or 3on3, guys are doing things in your offense they might not necessarily be doing in the full 5 man setting.. or a coach is passing to fill in the space etc – going right to 5on5, you eliminate this.

Constraints:
• Time – more or less
• Score – one team lead/behind
• Limit the amount of dribbles, turnovers, possessions, offence rebounds, talent!
• Loading one team up talent wise but giving them shorter shot clocks to work with.
• How we are running team based defence or offence (zone/man, ball screen d etc)

Starter of Possessions:
• Blob, slob, press attack, free throw (make/miss), half time, ATO, off a turnover, saving a ball
from going out of bounds, off a rebound, out of the low post, out of the high post, vs zone –
the list goes on.

A few drills we used to get going for transition into

Last Shooter/turn over, Last Back
– 5on5 off one of the starters above, but who ever shoots it last, or turns it over has to touch a cone on the back of the baseline and then get back into the play. Creating a momentary 5on4 advantage.This was a great one, albeit a frustrating one for offence that gets a score.

321 – same start. Outside players are 3’s, then progressive toward the middle 2’s and 1.
Coach calls out a number (1 or 2 or 3) the number called has to touch the baseline, rather than
where the ball is thrown, so you could have a 5on3 advantage. 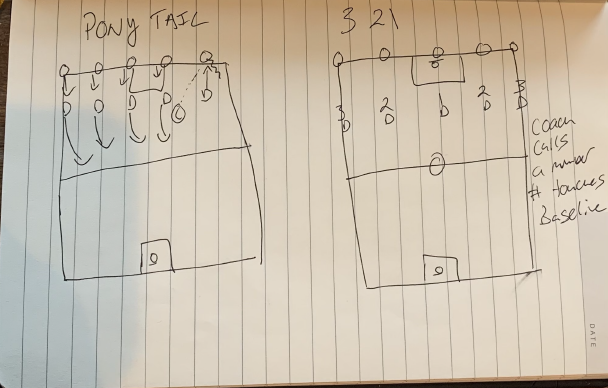 Random Shell: shell to close outs, 5on5, spots at random, coach either yells play or switch.
Play = team with ball plays live possession, switch = team with ball drops ball wherever it is
and immediately goes to transition d.

What we would add to our practice plans was different starters to possessions if we were
going to go up and down we would have a constraint, followed by a starter of a possession, to
kick things off.

The example of layering these things together would look like this

Once we had the structure in with what we were teaching, either through walk through, partial
speed, or through providing advantage to one side of the ball or the other we would play with
and through the above methods, focusing on whatever the topic was for the day.

Example:
Topic: Ball Screen Defense
Walk Through: teach this in 5on5 man setting (it would be broken down more finite in skills the next day etc)
Play 3 Minute Mini 5on5 – it looks terrible, as expected, break down, talk through it, meet as a small group, then larger full group, seeing how far the kids could take it on their own without us needing to help out.
Rinse and Repeat. Give up the control and see what happens.
Take the sculpting approach, if you don’t like it, put your hands back on the clay and keep working it.

The last component here is:

Assign your assistants various focus points to watch, get into, and break down.
If everyone is watching the ball, who is focusing on everything else?

Hope the holidays are treating everyone well.
tb