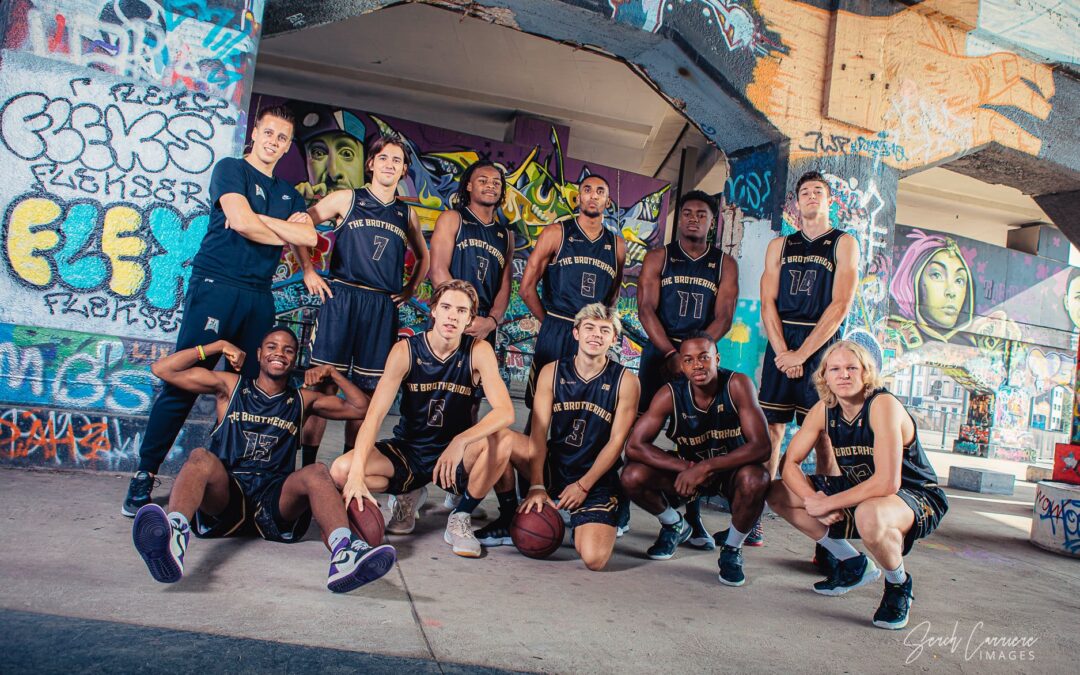 The Screen the Drop option is a useful tool against teams that play a (deep) drop and a great opportunity to get easy looks at the rim or create shots from the outside. Before training the Screen the Drop we have to be able to know multiple skills. The following skills will be trained before going into Screen the Drop:

KOB practice 1v1
Why do we want to use the KOB? It allows you to have more time as well as more vision on the court in a dominoes situation. By holding the defender on your back the first domino piece has fallen, and you can determine your next move to continue this advantage.

We train this 1v1 with the simple objective for the offense to keep the defense on his back and the defender has the objective to get in front (without fouling).

Example 1:
Offense starts with the ball. Defense must try to get in the paint in front of the offense. Defense can only enter the paint by crossing the Free throw line and can’t enter from the sides. 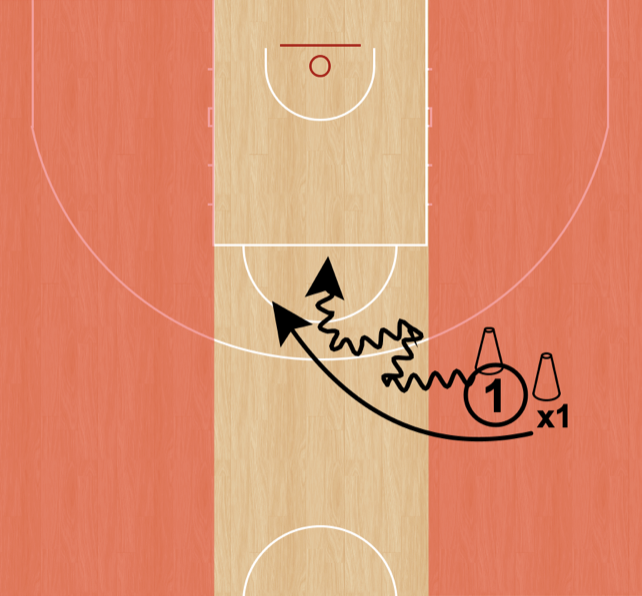 Example 2:
Offense starts moving from the wing with a defender trailing and wanting to get in front. Offense must use the KOB to avoid this from happening and has to use the KOB before entering the paint. 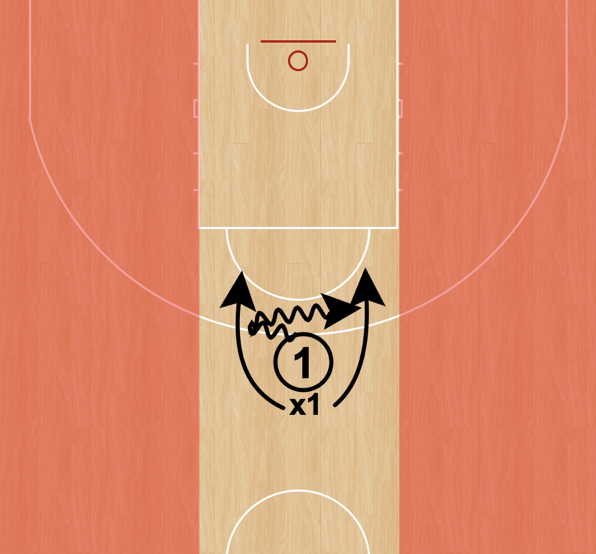 KOB and snake after the screen 2v1
With the KOB in our bag of skills we can start bringing in the screen. We would prefer this to be a real person over cones/bags or anything else. As it also trains the timing of the screen as well as the angle. The screen has to be placed in such an angle the defense has to go over the top and trail the ballhandler. The screener can only set screens and isn’t allowed to score.

Example 1:
Ball handler is on the swing / top and gets the screen from the short corner / dunkersspot. Screen has to be in such an angle so that the easiest way to defend this is to fight over instead of diving under. A vocal que for the screener could be that you say he needs to screen the backpocket of the on-ball defender. With that angle the fight over is easier. 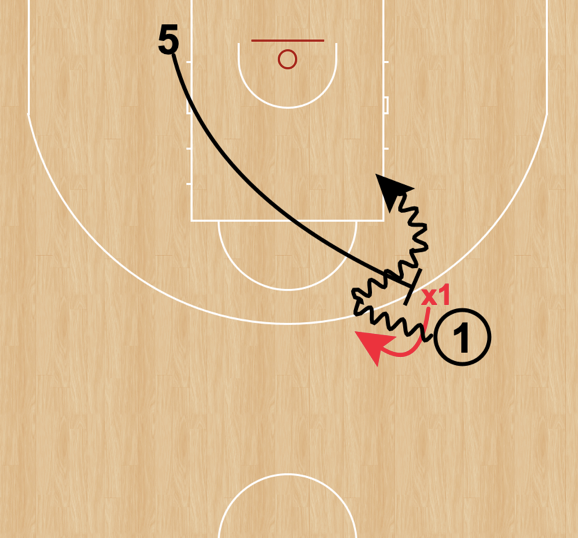 Example 2:
We start more on the wing and have the short corner / dunkersspot guy coming up for the get first. Upon receiving the get back he will immediately screen and we want to train the same things as mentioned in example 1 after the screen.

KOB after the screen with a (deep drop) 2v2 Guided-live
Now we are going into the 2-way teaching. We train to defend in a (deep) drop. In which you can’t screen the drop just yet. We use the same set up as before. By connecting we can be deceptive and either go for a nail/trail get or for a screen on the swing right away. Defense is guided at first: It has to be in a drop and the on-ball defender has to fight over the screen. After fighting over / being a drop defender we play live. By using the KOB the ballhandler should get enough time to maybe snake and create a shot (floater) for him or an easy look for the rolling big.

Example 1:
With the same set up (swing / short corner) we will play 2v2 guided live. Defense has to be in a drop and fight over the screen. The offense can be deceptive and can call for a get or screen. While this will give the offense a huge advantage you can use different constraints.
For example:
Only allowed to score inside the paint
Only allowed to play within in the lines of the bucket after the screen 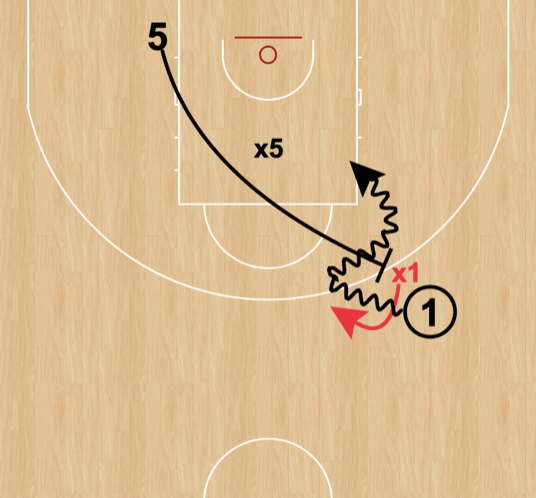 The other counter against a (deep) drop coverage is a pop after the screen. You might give them this que or let them figure it out at first. Sometimes players will see it themselves. Or you can ask simple questions such as: where is the most space after the screen with a drop defense?

Screen the Drop 2v2 Guided-live
After they know how to use the spacing well enough, we can go to screening the drop. This is an elite move used by some NBA teams as well. You want to aim for an easy look inside – most likely at the same side you started before going over the screen. When using the KOB you allow the screener to dive and set a but screen / normal screen to the drop. While the screener is diving you can KOB/snake to the side you come from and attacking the lane created by the screener

Example 1:
We use the same set up as the guided live version in the previous examples. The only addition is that the screener must now screen the drop. As mentioned, this is a guided drill which allows the drop to be screened. After getting some touches with this guided version we can go 2v2 live. Allow the offense to either play:
Screen the Drop
Pop after the screen against the drop 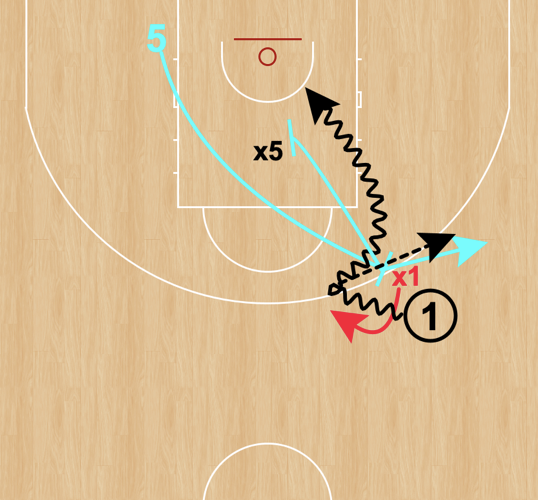 Insert this into SSG’s
The next step is to load it up into 3v3 / 4v4 and eventually 5v5. By starting off with 3v3 – I like to go with a strong side corner as extra offense/defense – they must know learn to read the 3th defender as well. Is he helping on the drive to the basket? Is he staying with the corner? As well as reading and communicating with the screener. Does he pop? Or does he screen the drop?

The most important part in this is to: Talk Task. We encourage players to talk task as much as possible. By talking task and communicating with the ballhandler and other guys you know what’s coming. If he says pop, we know that he pops. Same with the screen the drop. If he lets you know by talking the task that he is going to screen the drop, you know you have a possible lane to score.

Enjoy teaching it to your guys and / or girls!