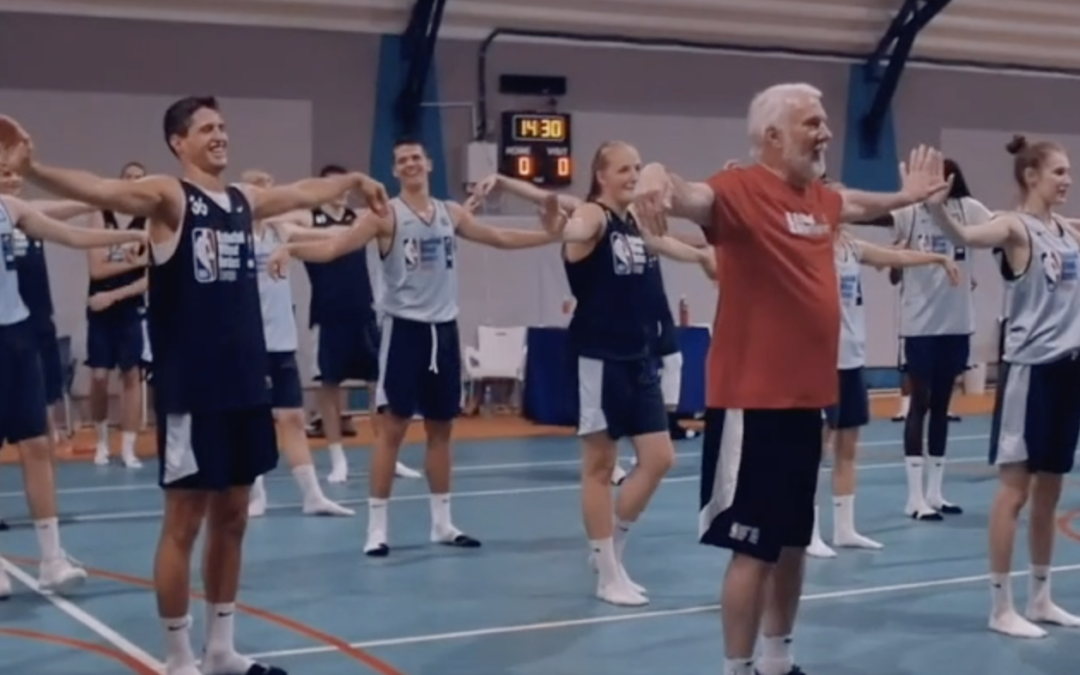 Yesterday I was reminded of a meeting I had with legendary basketball coach Greg Popovich with my colleagues at EA.

We had a lunch with coach during the break of Basketball Without Borders Camp in Serbia in 2018.

Of course as long-time admirers we all had questions for him and the real essential thing I must say was his emphasis on humour in his approach.

In short, he seemed to be testing the reactions in his players. He created little situations where he would see how they’d deal with his sarcasm. Whether you were the MVP of the team or a rookie, he’d treat you the same.

Sensing his vibe somewhat, I asked Popovich if he would be open for an experiment. I told coach about a stillness practice that we do called “Tam Pin” where we hold our arms out for 7-9 minutes. I told him we do it with our basketball academy kids that are under 14 years old and that they did it better than these future NBA stars at the camp.

I asked if he’d walk in when we’re doing it with the group and join the practice to set an example.

What then unfolded was an unexpectedly funny and grounding situation: he joined for sure, but then also went to trash-talking in the face of the guys that were giving up or were mocking the practice. Even better, he never let his arms down during this whole thing.

Thinking back of this meeting with one of the most successful basketball coaches ever, I’m realizing that he seemed to be using humour both as a test as well as looking for it as adaptive trait in his player to stay flexible during obstacles in the game.

To contrast: what I’m seeing with many of the kids I work with, who are often very talented, is the initial fear of making mistakes during practice. Within our learning culture we try to create an atmosphere where you will fail constantly, whether you get hit in the face by a tennis ball, lose your basketball dribbling, or need to try many times over to learn a new coordination – you will need to tinker a lot to get through the obstacles.

We don’t frame it as failure, because the maneuvering through is the exact skill we want to develop to help them thrive in the actual conditions of their sport.

A key trait in all this seems to be able to stay or return quickly to a state of joy and exploration – and humour is a trait that seems to help you to become a witness of yourself for a little fragment of a moment. It helps you to lose your internal identification to the performance – to move past trying to hold on to “looking good all the time.”

Popovich seemed to have understood something about the role of humour in a high performance environment. He looked for humour – even screened for it – in his players.