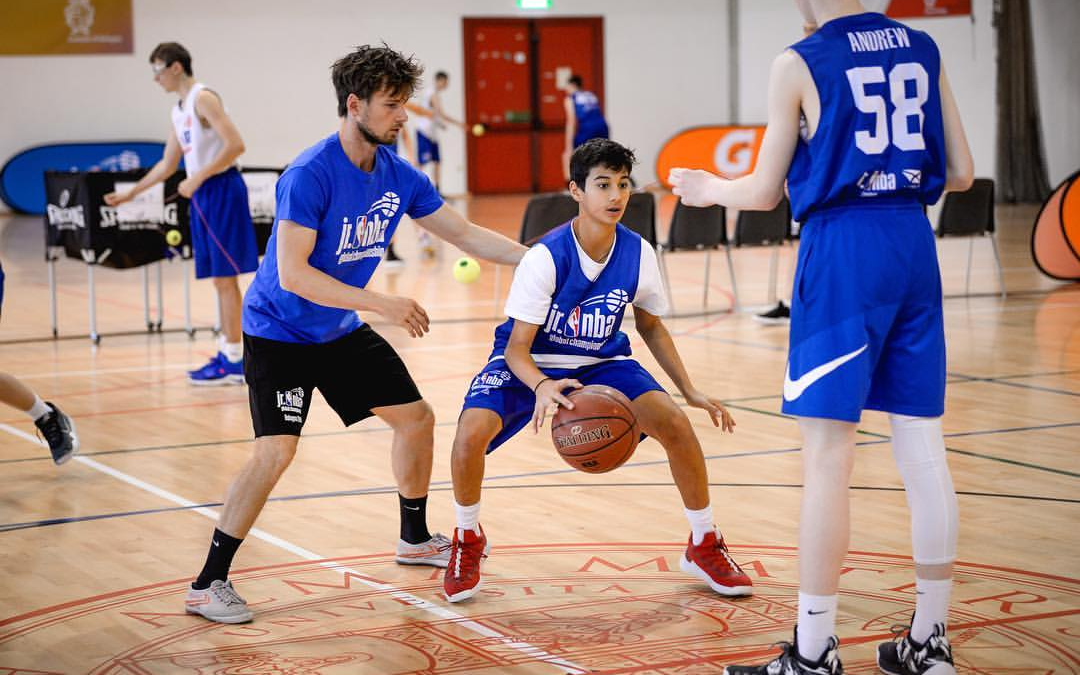 One of the ways in which I like to build up an athletic development practice is asking beforehand the exact topic our basketball skills coach will be working on.

The session in the video below, as you can probably imagine, was centered around using the jab step as an offensive footwork weapon.

The jab step as a movement by itself is an interesting rhythmical pattern that demands the athlete to be in great control of the use of his body.

Beyond that jab stepping is not just done at random, it is done in relation to the foot placement of your opponent in order to create an advantage as an offensive player.

So in order to prepare the players for the work their body will go through I’ll have many pathways to get to it.

I could teach them jab step variations: small ones, large steps, stepping forward, more diagonal, a small one first – into larger step, etc.

But drilling them I would be cheating them a bit because the reality of the game is not that simple that it can be simulated through drills:

To summarize the complexity: not only should the player observe the feet of the one in front of him, he also has to see the other players running around in front of him, there is a shot clock running, the coach might be yelling a cue at him,… you get the picture. This game is complex!

You see then, we really cannot be practicing a jab step by itself. Drilled in isolation it is nothing. It should be practiced in relation to… in a complexity that connects with the actual reality of the game – or as one of the quotes on our Training Facility walls says “hard in here, easy out there.”

Often I have asked a player “why would you jab?” or “when would you jab step?” only getting a blank stare. I think drilling such steps or dribbles in the kids makes them a bit passive in seeing beyond the move.

Therefore I feel as coaches we should aim at setting up games with certain rules that make the kids think, perceive and act for themselves – really understanding why a certain move would be used or even better: coming up with moves out of necessity. Because in the end, what is the origin of a move?

To build up games like these into a session I am vigilantly observing how players respond and cope with the task. I am walking around collecting material for the new game, the next set of rules.

A session might start with circling a Practice Ball on the level of the feet and jabbing in and out of the open spaces.

I allow them to figure it out and see what they do. I encourage them to research the situation, rather than train it.

I trigger them with different types of music asking them to tune with the rhythm.

I might ask one of the players to show their way of solving the riddle to inspire the others.

I look for trends in their behavior that would not work in the game:

“eyes always looking down does not make sense, how can I get them to look both up to see the court and down to see the feet of the defender?”

I could yell to the players “eyes up! keep your eyes up!” but as you all know we can yell that for decades, still getting the same result.

Getting hit by a tennis ball in the face however will quickly create a shift in their reactions. They will need to stay adaptive and see the situation as it is.

Personally I feel that’s a fascinating way for both the coach and the players to collaborate as co-creators within a practice environment. Both need to stay flexible and alert.

Coach creates a game.
Players try the game by figuring out ways to respond to it.
The coach as an observer sees how players try to solve the game.
The coach collects observations of coping behaviour (for example “eyes are always looking down, that would not really work in basketball”).
The coach creates a new game that will hopefully guide players to more “adaptive” behaviours. (“with an added Practice Ball at head level, they will learn to shift focus from down to up”).
…
As the session unfolds rules change often, partners change, and the games reach more and more complexity preparing them for the reality they’ll meet in The Game.

In the end, the coach will need to stay vigilantly attentive and creative – just as he envisions his players.